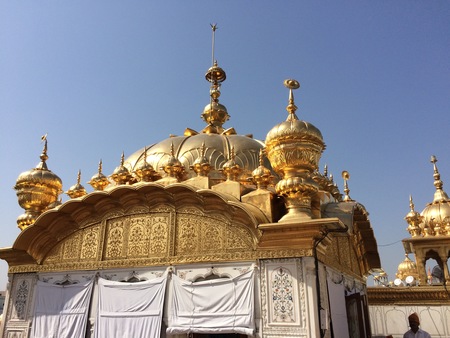 This is a follow-up to the first day of my trip to Amritsar. Check out day 1 here!

On day 2, after having breakfast at the hotel, we decided to go to the Golden Temple. A majority of Amritsar’s population is made up of sikhs.  The Golden temple is the Sikhs’ place of worship; a “gurudwara”.

It was, as mentioned earlier, within walking range from our hotel.

When you visit this temple, it is a good idea to not dress in casuals, but instead a Kurta-Pajama/suit or traditional Indian attire. Irrespective of anything, you should be modestly dressed. Your hair should always be covered by a piece of cloth. For this you could take your own scarf or use the orange pieces of cloth available at the entrance. This is the suitable image that one should maintain while visiting this temple.

If you want to get to the main shrine quicker, you should go early in the morning. All of us were very tired, so we went pretty late at around 8:30 am.

After reaching, we removed our footwear and submitted it. We cleaned our feet in a pool of holy water and went in.

The picture that greeted me was stunning. The sun was mild. There was this huge, tranquil and crystal pool of holy water with ripples reflecting the sunshine. At the middle of the pool was the holy temple itself. There was light traditional music playing all around. The kind that just wants you to sit in peace and never let the moment end.

We figured there were more moments to come, so, we got into the line to get into the shrine. It took us 2 hours to get out turn but it was worth the wait. The architecture I saw was magnificent; from crystal chandeliers to gold plated columns and ceilings.

The beauty of even the people in the line was impeccable. The smallest of things here are so majestic. The crowd which visits this place is so diverse, that when you see the line from above, you see not monotonous black heads, but rather regal specks of colour that come from the ‘Pagris’ of the sikhs and the head scarfs of other visitors.

I was even more amazed at the interior of the shrine. There were beautiful murals of Sikh Gurus and other symbols. 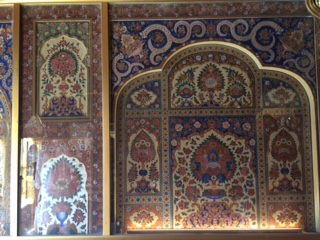 It was just enchanting. In the middle of the room was the ‘Manji Sahib’ , a raised platform where the ‘Guru Granth Sahib‘ is kept. It is the holy book which contains the teachings of the Sikh gurus. This book is always covered with cloth as a sign of worship and respect. It is also covered by a canopy called a ‘Palki’ . I couldn’t get any pictures here because it is considered out of order to do so. However, this place also taught me something about Sikh culture.

So, Sikhs believe in ‘Ik Onkar‘ or one god: it is a monotheistic religion.

Sikhism does not believe in materialistic things but instead in helping all those around. For this purpose a daily ‘Langar’ or common kitchen is set up. It is open to all.

It is based on 3 pillars.

So, back to the temple. Once we exited the holy shrine, we went near the water of the pool and saw the fish. This is such a picturesque location to take some really great snaps. 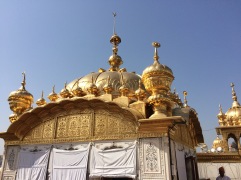 By this time, it was time for lunch. We went to a local restaurant which wasn’t great 😦 After lunch, we went to the hotel and had a good rest.

We went to the Golden Temple again in the evening. The place had just transformed. It had transformed into an epitome of beauty, grace and God. The Golden temple was glinting off light which made it look amazing. The area all around was dark, which gave an exhilarating, authentic feel. This isn’t made up beauty. It is pure and godly.

We stayed for the ‘Langar’. We were made to sit down in rows, where the volunteers gave us food to eat. The work happens here at an incredibly large scale. Thousands of plates and ‘Rotis’ (breads) and buckets of ‘dal’.

After the Langar, we just spend some time strolling around in the bustling evening market till quite late at night. Some of us had piping cups of tea.

Day 2 eventually came to an end. It had brought me to one conclusion, that Amritsar was a calm and amazing place with a different and unique culture. On day 2, I had seen one small part of it and had been mind blown. I had also learned about a new culture.

However, a new side of Amritsar awaited me.

2 thoughts on “Beauty and Serenity: Amritsar”